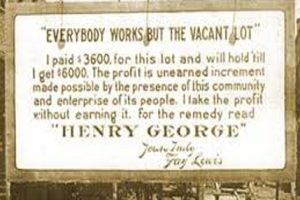 Thanks to his genuine concern for the well-being of workers, hostility to monopolies, and principled opposition to private property in land, economist Henry George is often viewed as a socialist. Yet George wanted nothing less than liberty for all. In his words: “Where Liberty rises, there virtue grows, wealth increases, knowledge expands, invention multiplies human powers, and in strength and spirit the freer nation rises among her neighbors”.

George’s ideas have been denounced and praised by prominent Libertarian thinkers. In this seminar Tom Ballou compares and contrasts the views on the George philosophy of noted Libertarians, such as Murray Rothbard, Frank Chodorov, Milton Friedman, Frederick Hayek, Benjamin Tucker, Albert J Nock, Francis Nielson, Fred Foldvary, and others.

Maps were disabled by the visitor on this site. Click to open the map in a new window.