Colombia – the Peace Process and the Prospects for Land Reform 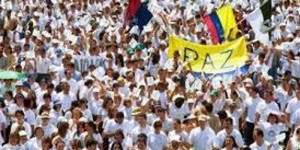 After four years of negotiations in Havana, the government of Colombia concluded a series of peace accords with rebel groups. The accords were ratified by the Colombian Congress but rejected by the people in a referendum. Three months into a post conflict era in Colombia, questions arise about the legitimacy of the peace process. What are the prospects for land reform, a central issue in the conflict and a key component of the accords? Andrés Ceballos reviews the threats to the peace process in Colombia.

Andrés Ceballos is a Colombian American political expert. He spent the last ten years working in military and development cooperation programs between the United States and Colombia. His most recent position in the Electoral Observation Mission (MOE), a network of civil society organizations with countrywide presence, focused on the stewardship of political relations within the international community. MOE is a key participant in designing the new electoral architecture stipulated in the second point of the Peace Accords. MOE is an independent nonprofit organization that seeks to generate more active, informed and responsible citizens in Colombia and abroad.

Register
Back to seminars page
Maps were disabled by the visitor on this site. Click to open the map in a new window.