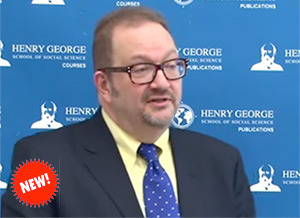 The Henry George School of Social Science, in partnership with Joshua Vincent, Center for the Study of Economics, is pleased to offer another of many of our new ‘mini-series’ courses.

This enlightening presentation compares and contrasts forms of taxations used in the U.S. today, with the use of Land Value Tax.  The course is available here, in 9 segments.  Watch at your convenience and leisure. 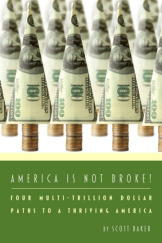 The unsustainability of the American economy is as familiar as the newscycle.  There is no money for social programs, no money to run the government, no money to cut taxes, and above all, we have to cut, cut, cut.

But, what if it’s not true?

Instead of familiar complaints about the national debt, leading to just slicing a shrinking economic pie differently, or worse, to Austerity Economics, the reality is that we already have all the wealth we could ever need. The tried and proven proposals in America Is Not Broke would guarantee America’s prosperity, fairness, democracy, and economic and ecological sustainability. Four multi-trillion dollar reforms: Sovereign Money, Georgism, Public Banking, and Ending Government Financial Asset Hoarding, plus a few other major reforms, show how we can have it all, if we only learn where to look.

Click here to order your copy today or call the Henry George School (212) 889-8020
Click to register for the “America is Not Broke!” seminar.

Scott Baker is an Activist-Journalist and a Managing & Economics Editor at the top 100 blog, Opednews. He is a lecturer at the New York Henry George School, President of the New York chapter of the Georgist group Common Ground USA, and New York Coordinator for the Public Banking Institute. He has advocated for economic reforms on TV, radio, web and print media, and directly to local civic groups and politicians. Scott lives in New York City with his wife, where he is a biking advocate and ride leader. 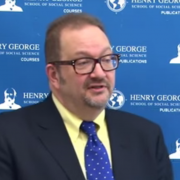 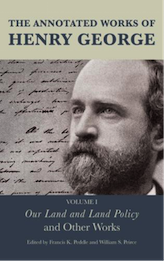 Join Dr. Alexandra Lough, Henry George School of Social Science, along with other esteemed scholars, on Wednesday, April 13, from 3:30-5:00P.M., in a panel discussion of “The Legacy of Henry George, Economic Populist and Progressive Reformer”.

This event coincides with the release of the first volume of The Annotated Works of Henry George: Our Land and Land Policy and Other Works, edited by Francis K. Peddle and William S. Peirce, published by FDU Press in partnership with Rowman & Littlefield of Lanham, Maryland.

The panel, which is free and open to the public, will take place in the Monninger Center for Learning and Research at the Florham campus of Fairleigh Dickinson University in Madison, New Jersey. For directions or further information on the event, please write fdupress@fdu.edu or call 973-443-8564.