Living Equitably with Tech at Any Age 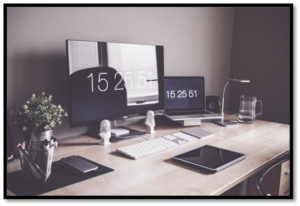 For all those kids out there from 1 to 92 who need to use technology how do you make it work for yourself? Are you really connected to the society or is society passing you by? This post explores the “red shift” inherent in our technological environment and how the pace of change and complexity it generates leaves a Digital Divide and an economic gap in its wake.

“BART waits for no man”. I remember hearing this from a stranger on the platform of a downtown BART (Bay Area Rapid Transit) station when I was a young whippersnapper. What had happened was someone had run to catch the train, yet the doors closed ingloriously in their face before they could jump on board. Unlike the NY Subway there was no conductor manually monitoring the riders. The entire system was automated even way back then. If you were not on the train it really did simply shut the doors and leave without you.

This is a useful metaphor for technology on many levels in our society. For many of us, the train has already left the station and we are left wondering how we remain behind on the platform. Even for myself, someone who has spent nearly 35 years as a professional IT engineer, sometimes I have no idea how certain things work. Of course, in my case I am endlessly fascinated by these devices and willing to discover their patterns and furthermore, over the years, I have found ways to decipher their tricks. However, I was struck anew by the potential for the impact of the Digital Divide when spending time with my nonagenarian father-in-law not long ago.

This gentle soul was trained in technology prior to the invention of the transistor yet remains ever curious often asking questions such as “how do cell phones work”. Try answering that one.

In this piece, let us examine how economic equality can be influenced by technology access and importantly the understandability of technology and how the repercussions of this might be viewed from the perspective of the concepts left to us by Henry George.

Since roughly the mid-19th Century the pace of technological change and engineering innovation has been not only startling but also accelerating. A quick recitation of the advances of the last two centuries take us from a primarily agrarian society driven by animal power and natural fuels to the modern capabilities of today spanning transportation, communications, biotech, aerospace, computing, and more, driven by planet altering fuel sources. If humankind’s head is not in a whiplash from these changes during this miniscule interval when put on a geologic and evolutionary timescale it should be. 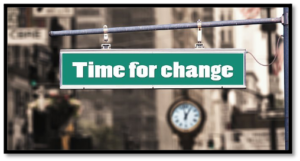 While there is not a formal definition of Technical Dissonance it is an easy jump to understanding this concept. The well-known psychological condition of Cognitive Dissonance sets the precedence here. In this case one has difficulty resolving competing concepts such as a value they hold versus a behavior they display. If we extend this principle to our experiences with rapidly changing technologies we can find ourselves in a state of “Tech Dissonance” where we strongly believe that we want to adopt a new device or software application, but our learned behavior (or lack of skills) prevent us from accomplishing this. Or, worse, we can develop fears or phobias and avoidance behavior around technology – or especially new technologies – as we have found them to be difficult to absorb and master.

Where this leads us is to a two-tier society. Not based on economic wealth alone although that can be a factor but also based on age, gender, background, training, skill, or support environment. This can and does have significant impacts.

Painting the Picture: A Divide to Conquer

The term “newfangled” was first used in the 15th century according to Websters so cynical reactions to new things is not something introduced recently. However, the range, breadth, and pace of change and advances of technology has indeed become breathtaking for most of us.

This has created what is now formally known as the Digital Divide not only across economic groups but across demographic patterns as well. The digital divide as it affects the aged can be highly impactful. The degree to which societies leave elderly or other individuals behind in the rush to adopt the next wave of technology can have significant repercussions both for these individuals and the society.

According to Conger and Griffith three-quarters of those older than 65 said they needed someone else to set up their electronic devices. A third also said they were only a little or not at all confident in their ability to use electronics and to navigate the web. Figure 1 demonstrates numerically this gap where greater than 25% of those over 65 do not even use the Internet. This level of tech capability (or inability) has a direct correlation to their ability to manage doctor’s appointments, family communications, and conduct financial management. 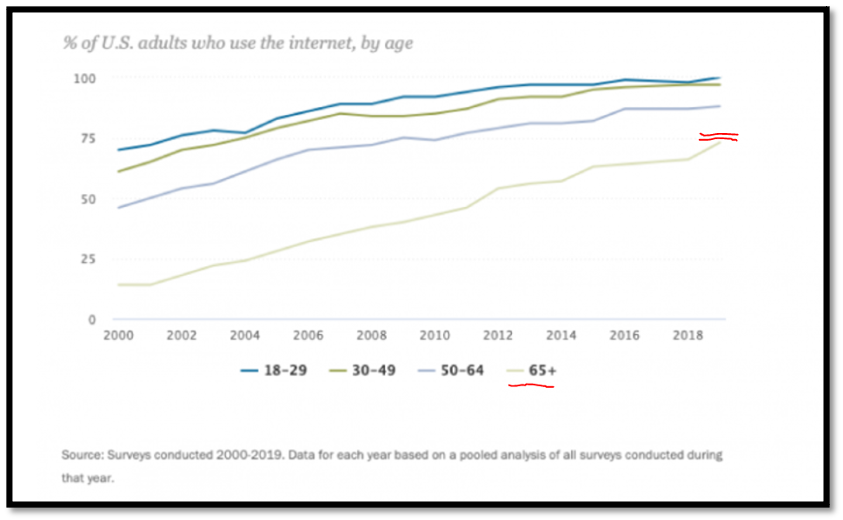 Figure 1 – Internet Usage in the US by Age Category

Interestingly, there is also an inverse condition which has been researched along these lines. Prof. Mocarelli has documented a reverse digital divide among younger generations. In their case, they have been raised on the Internet, smartphones, and IMs and Instagram. She reports that they are indeed adept in communicating with these tools. However, they also display negative impacts from using these tools as well.  In general, they have less ability to carry out in depth academic work which require lengthy reading and expositions.

The net result of this situation is that for some populations the ability to leverage technology – especially computing technology – is diverging. This has profound implications for our society. Especially in the wake of the COVID-19 pandemic the need for online access to critical services and remote delivery and communication has only increased. This includes telemedicine, grocery delivery, meal delivery, training, education, and communication with friends and family. Imagine how difficult it can be for an elderly person in the 25% category without access to the Internet. 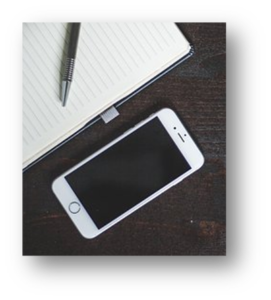 While there is no one simple approach to resolving the causes of the types of Digital Divides that we see today there are a few things we know that can help.

First off, anything new may confuse a person. There are some humorous YouTube videos of young children today being handed a cassette tape and asked to explain its purpose. The responses are hilarious as the children have no context for the technology.

This is true for all of us to some degree. That is why the art of user interface design is so special. I had the pleasure of leading a team of Ph.D. trained Human Factors Engineers at one point in my career. I learned how little I understood about making things easy for people to use. One of my staff had previously worked at NASA and explained to me that anything on a spacecraft has to be softly padded, big, and tuned to the chromatic color conditions of space. Essentially, you don’t want anything poking an astronaut’s suit or being hard to grab with a big glove.

Again, context matters. The first time you used an iPhone you probably did not know how to update it or move around the little icons. But now it is second nature to you. Among the reasons people like devices such as the iPhone are the easy to use controls, its learnability, consistency, design simplicity, and a well understood frame of reference (once you climb the initial knowledge ramp).

In addition to these traditional computing design solutions (which are not universally followed), Susan Nash of Stanford suggests that holistic solutions will:

“… require cooperation between Internet Service Providers, tech companies (both to design easy-to-use devices and to offer “senior” discounts, as has been done for years in the education field) and organizations that serve older people. And teaching older people unfamiliar with technology the tools they need to engage [by] increasing the need for more programs like Teeniors and Cyberseniors that engage younger people in helping older adults navigate online.”

An Economic Perspective of the Digital Divide

Pivoting from the purely technical and societal to layer on an Economic perspective let us consider a few thoughts from Henry George the 19th Century Economist and Philosopher whose thinking provides an added angle to all of this. One of the ideas of Henry George which I am fond of is his notion that urban life generates culture, innovation, and higher levels of equity in society over time. If we extend this to our modern day electronic and online communities I believe some of his writings apply and are in fact prophetic. Here in his masterwork “Progress and Poverty” from 1879 he states:

“… the great cause of inequality remains and is manifesting itself in the unequal distribution of wealth. Thus, association in equality is the law of progress … Association frees mental power for expenditure in improvement, and equality, or justice, or freedom …”

Here, George instructs us that to combat inequality we need progress in society and to achieve this we need to associate with each other in a community. Therefore, in a digital society separated by distance and technical complexity this association has a new set of barriers and reaching equality and more equal distribution of wealth can be challenging.

George strengthens this thought by adding: “Improvement becomes possible as men come together in peaceful association, and the wider and closer the association, the greater the possibilities of improvement.” Again, this adds urgency to the requirement for us to ensure technical access to all social members to defeat the Digital Divides we see around us.

Finally, for George, the true cause of inequality of course was rooted in the nature of land as an economic factor. In his words:

If we consider the digital landscape in relation to the land portfolio of George’s philosophy we can begin to see the same economic divisions arise for people if they are separated out via technological means regardless of their landed status.

Curiously, I am not a gadget person. I do make my living building systems, but I do not chase the latest in technology, so I am sympathetic to both ends of the spectrum. I understand those who embrace new technologies and those who can take it or leave it. Since I define technology in the classical sense as human developed artifacts, of course nearly everything human created falls into the realm of Tech & Society eventually. However, I think the topic of the Digital Divide is especially important as it is in a way extraordinarily human. Afterall, it’s amazing to think that someone nearing 100 years of age can talk live via video phone across the world at the drop of a hat. What will they think of next? And how will we bring everybody along for the ride? 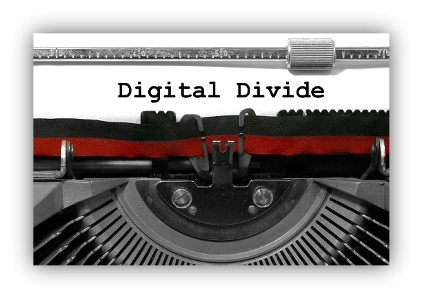