Lions and Tigers and Technology:
Why new tech (like vaccines) scare us 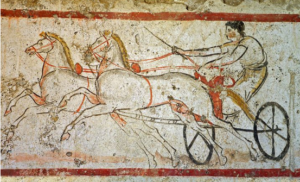 Since the earliest times, technologies have been a two-edged sword – literally. They cut both ways. We all remember in our Jungian collective unconscious the scene where the exceedingly useful wheel – now on the nasty armed chariot – scares the fleeing peasant. Boy, the inventor of that technology sure never intended for that to unfold.

There are pros and cons to all of humankind’s technologies. I remember the first time I smashed my thumb while pounding in a nail. Ouch! I am sure most people still support the use of hammers despite this risk. Amazingly, even with our over litigious society, the last time I checked, hammers are not sold with warning labels.

But despite this pain we move forward. This is innate to our species. We understand that all technologies have drawbacks. They also have benefits, advocates and opponents. Interestingly, when trains were first introduced, educated people actually thought that these machines would never be able to exceed the speed of a horse because a human would not be able to breathe while going faster than that. This was their contextual frame of reference in 1802. Sometimes people just need time to understand what a technology is all about. Would you want to volunteer to be the first user of a 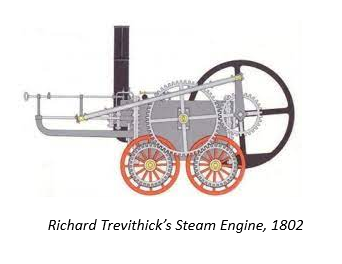 transporter beam which disassembles and reassembles all the atoms in your body to send you uptown? I thought not.

In fact, when elevators were first introduced in multi-story buildings in NYC eventually making today’s high rise living possible many people refused to ride in them out of fear. It took a Public Relations campaign by the manufactures (and adding additional emergency brakes) to assure people of their safety. As we all know, today’s fastest trains run at over 250 MPH and horses still run at 55 MPH flat out. And generally, most people do not think twice about stepping into an elevator.

What of Vaccines as Technologies?

With the recent emergence of the novel COVID-19 virus and ensuing pandemic, it is instructive to consider vaccines as a human technology which have positively impacted our society. We can look at this in the longer historical light, the technological setting, a social context, and the economic philosophy backdrop of Henry George. This can help bring some focus to what we are seeing today in our push towards a global deployment of vaccines against the COVID virus which have so disrupted our lives, economies, and societies.

The very first broadly effective vaccine, as many people know, was developed in 1796 by the British doctor Edward Jenner who demonstrated that an infection with the relatively mild cowpox virus conferred immunity against the deadly smallpox virus. Much later in the 20th century, the World Health Organization conducted a global vaccination campaign that successfully eradicated smallpox, making it the only human disease thus far to be eradicated – a major milestone in technology, medicine, and global public health.

Jenner’s work laid the basis for vaccinology and researchers such as Pasteur, Glenny, and Salk all created breakthroughs with vaccines for cholera, tetanus, and polio, respectively. These vaccines were made possible by many different methods including bacterial approaches and whole cell vaccines. In recent years, new techniques such as molecular genetics and now DNA based approaches are also in use.

These advances have not come without challenges. As Petroski explains in “To Engineer is Human”, we are only as good as our last attempts and failures. This drives us to further perfect our solutions. Naturally, I can understand where people might have some reluctance around vaccines especially recently developed ones. Again, do you want to be first on the transporter pad?

One of the ways to understand this is through safety sciences. I once had the pleasure of meeting Dr. Nancy Leveson of MIT who is a pioneer in this field. We were both presenting results at a software engineering conference at NASA. Prof. Leveson develops methods of understanding safety in complex heterogenous systems which are life-critical. These methods are founded on empirical and verifiable models and risk-based engineering. It is research like hers that sets the acceptable safety margins for systems that all of us rely on each day such as aerospace control applications. Similar models are used to understand the efficacy and safety of vaccines at the FDA and CDC.

Let us take a look at a couple common risk areas that such models help us to understand:

Now let us talk about COVID-19 and the vaccine risks: 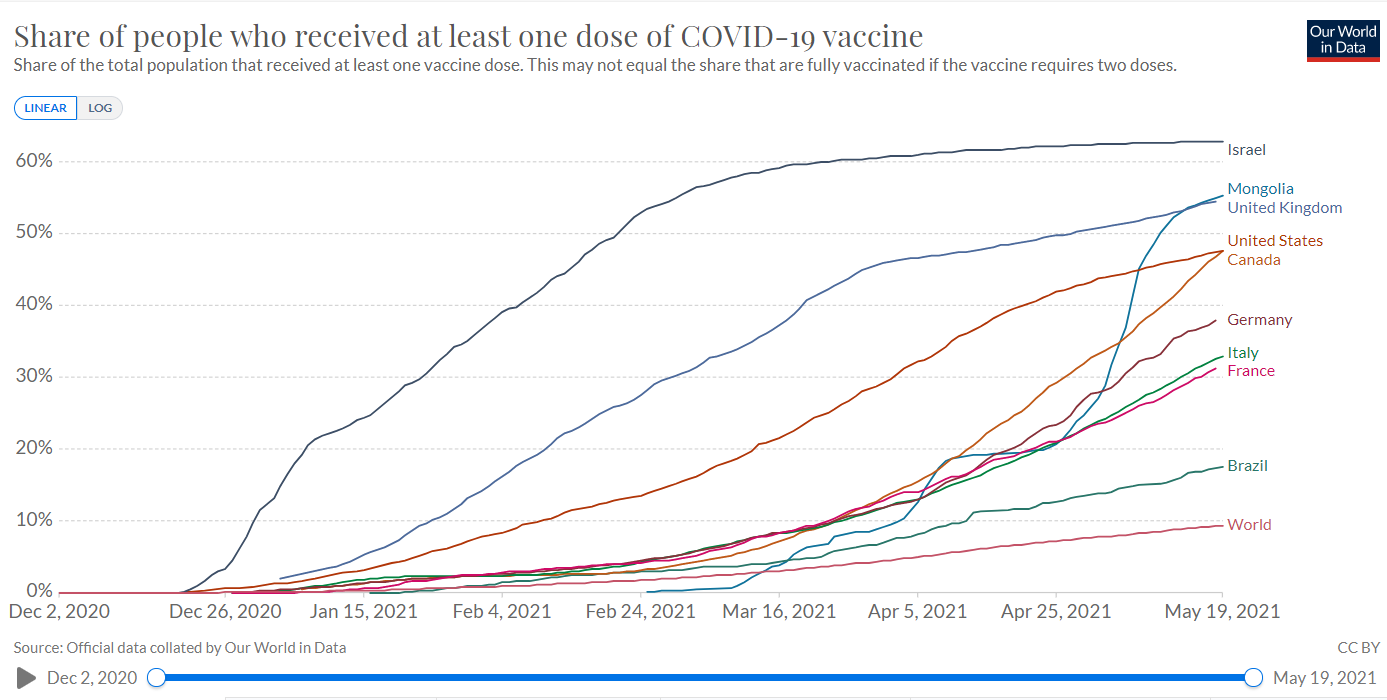 So, what can we learn from this data? If we view this from the perspective of the law of large numbers, such volumes in the billions of doses and relatively limited deleterious effects demonstrate benefits far outweighing the risks. Of course, we cannot make light of any one individual’s possible negative experience and this discussion is not meant to be specific advice. However, as for the vaccine, the safety rate appears to be far higher than simply flying to Florida or driving down the street for a gallon of milk. And for society itself there is a net benefit of protecting itself through the use of this technology.

Vaccines and the Economy

In addition to the public health crisis of the COVID pandemic, a devastating 34% drop in 2020 US GDP ensued. While the economy is on the mend in 2021 to what extent can vaccines help and are there ways to accelerate or broaden such improvements? If we look around most of us can attest to the fact that the increased level of vaccinations have strengthened economic activity at least in the US.

From a historical and systemic basis, this is also proven to be the case. As an example, the Smallpox vaccine has saved an estimated $1.3 Billion and 30,000 lives per year globally since being introduced. According to McKinsey, an effective vaccination program could add $1 Trillion to the US economy by the end of 2022. While this kind of projection is hard to pin down, the Global Alliance for Vaccines and Immunizations (GAVI) has studied the combined impact of vaccinations on economic returns over time and have found such programs can add 12% to 18% annually (see Figure 2). 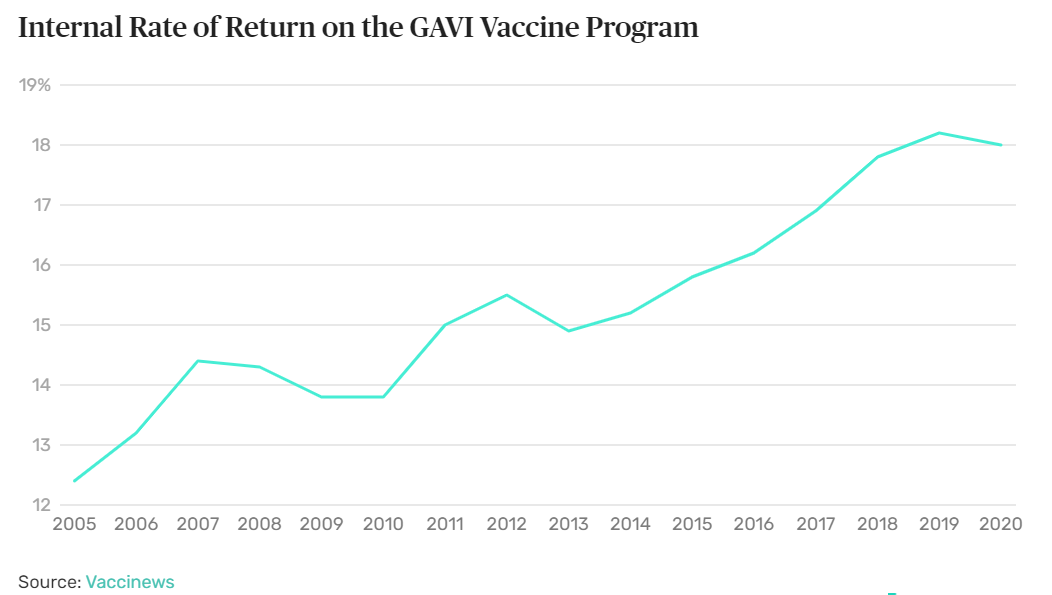 Unfortunately, vaccines alone will not return our economies to pre-pandemic stages nor were those conditions necessarily ideal for everyone. According to a recent United Nations report, inequality in the distribution of vaccines between countries and regions poses a major risk to ongoing fragility in global economic recovery patterns. Moreover, the pandemic had the added side effect of pushing over 114 million people into extreme poverty. Over half of these individuals were women. Certainly, more will need to be done.

Henry George and the Public Good of IP

For Henry George, the 19th Century Philosopher and Economist, he understood that solutions such as vaccines would help. However, in his view they should ultimately move to the public domain. We can look at this from two perspectives – direct government funding of R&D and the laws protecting Intellectual Property (IP). For the first, the US Federal government injected at least US $10 Billion into public and private R&D to accomplish COVID-19 vaccine realization through Operation Warp Speed starting in 2020. For example, Moderna alone received $1 Billion in direct US Federal investment for vaccine R&D in 2020. This boosted share prices and the wealth of its executives. While some companies, like Pfizer, refused direct R&D funding to limit follow-on claims on their IP, most companies were eager to sign up for both research dollars and multi-billion-dollar supply contracts from the government. Pfizer did sign up for the later in a big way. From research underwriting to demand generation it is the US taxpayer then that more or less directly owns the vaccine technologies themselves to some degree.

When we also consider the IP side of the equation, it is interesting that this has recently gone through a long public debate in the news media as it relates to global equality and access relating to vaccines. For the greatest good, it would seem that the formulaic approach to these solutions, at minimum, if not additional technical know-how, should, in fact, be shared gratis with perhaps some compensation for R&D. Not doing so places an economic burden on those countries least able to afford such technical solutions and jeopardizes the global community by impeding global herd immunity.

In fact, in George’s classic “Progress & Poverty” he discusses how patents, such as those around vaccines, in essence create a special form of monopoly power which do not always help those who need it most. For the Pfizer instance, COVID-19 vaccine sales in 2021 are expected to be $15 Billion with an estimated $4 Billion in profits. As George put it back in 1879:

In a bit of a shocker to industry, in early May 2021, the Biden administration announced support for the waiver of Intellectual Property controls on vaccine technologies to help support the fight of the pandemic internationally. This was done over the fierce objections of the pharmaceutical lobby and, as you can see, is quite in line with one of Henry George’s key philosophical principles. George, in fact, took the broad position that creative work fell into the common pool and should not be restricted. Thus, patents should not be profited upon as they are today. Perhaps $4 Billion in profit is a bit on the excessive side when millions of people are at risk of dying.

In the end, stepping onto that transporter pad certainly is a personal decision, or is it? According to Hobbes people are both self-interested and rational. Yet, according to medical experts, many people’s vaccine hesitancy stems from beliefs that the COVID-19 virus is actually not real. I would posit that this is itself not rational. Further, from Rousseau’s perspective built on the ancient view of Socrates each of us makes a bargain to benefit from society’s largess by abiding by its parameters otherwise known as the Social Contract. This was fundamental to the concepts behind the Declaration of Independence and the US Constitution. I would further suggest that in our current situation making a rational assessment of the technology risk is essential for the collective stability and recovery of society. 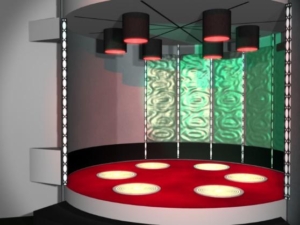 Figure 3 – The transporter pad – step into the future!

In aggregate then, and despite the recent rise in holdouts to this lifesaving technology, vaccines have proved to be both humanitarian and economically bolstering over hundreds of years. They have saved lives, helped stabilize economic life, and provided hope. Having been a technologist all of my career, I can honestly say that I have never seen anything so positively dramatic in such a short period of time as with this recent vaccine. While I am not blind to the risks and am rooting for an equitable global distribution of the technology, at the same time, I am hoping we all step onto that transporter pad together.