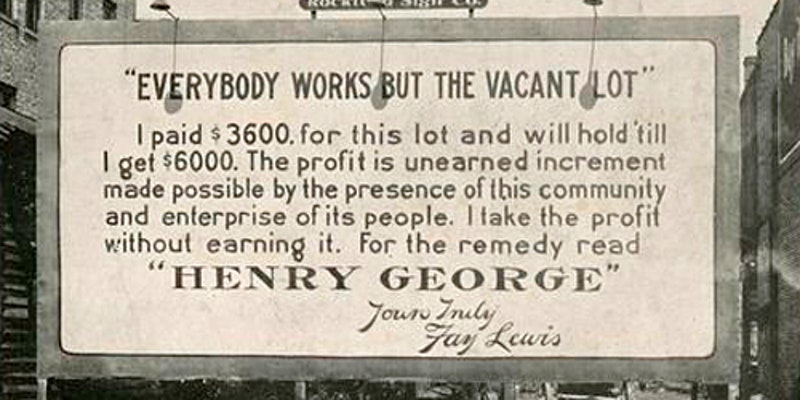 Join us for this new series of lectures on George’s quest for the “perfect tax.”

In less than two years after Henry George first began publishing his weekly newspaper The Standard in January 1887, he begins recording a drive (in November 1888) to replace state-wide enforcement of the single tax with a uniform national single tax governed by Congress. This series of lectures and discussions chronicles that national drive from its inception, until after the 16th Amendment is ratified in 1913, which is when the national movement and the land value income tax (LVIT) should’ve resumed, after a major setback caused by the Supreme Court in 1895, but never did.

Session 1: Formation of the National Movement

• Platform of the Single Tax League of the United States

• Required Adoption of the Platform

• Final Months of The Standard

• Unauthorized Alteration of the 1890 Platform

• The LVIT is Law for 7 Months, Then Ruled Unconstitutional

• Shearman’s Response to the Ruling in Pollock v. Farmers’ Loan (1895)

The instructor: Richard DiMare is a graduate of Boston College and the Massachusetts School of Law, and has been a licensed Massachusetts attorney since 2006. He is interested in only one area of law, that which helps wage-earners, both white and blue-collar, to claim a property right in their wages, thus beginning the long-overdue process of shifting the tax burden away from wages and onto unearned incomes and large estates. Richard’s interest in this area of law likely developed from his background in the commercial fishing and seafood industries, witnessing many workers fighting for survival wages, then being taxed on those wages, while passive receivers of unearned incomes were increasingly under-taxed, or not taxed at all.

3 sessions
A zoom link will be provided via email before the start of the first session.