Who Will Pay for the Huge Costs of Holding Back Rising Seas? 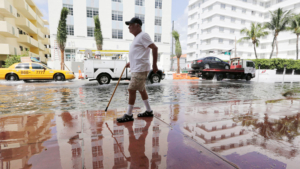 Tackling climate change has gained prominence over recent years. There are many ideas for how it should be done, as well as how to pay for it. Some are focused on how to reverse climate change, while others search for ways to protect against its effects. Jim Morrison’s article does the latter, as the title of it implies. Towards the end of the article, he quotes David Levy, who says that investing in climate resilience is “protecting against future damage, but there’s not a new positive cash flow. You’re not creating new value. You’re protecting against the loss of existing value” (Morrison, 2019). While investments in climate resilience will protect existing value, they certainly can create new value.

Levy argues that climate resilience investments will not create value, but this is simply not the case. Public investment in the form of walls along coastal areas to protect against rising water levels may preserve the land value of those areas, but it can also entice people to move there. Following natural disasters, such as Hurricane Katrina or Superstorm Sandy, people may decide to not move to the affected areas. By building climate resilience infrastructure in affected/disaster-prone areas (which would enhance safety), people may consider moving there. This, in turn, would lead to greater land value, as more people would desire to live in these areas. Even those who originally lived in these disaster-prone areas and left may return, further creating new value. If a land value tax system were in place, government (at all levels) would see a boost in revenue due to increased land value. This would ensure that any additional value created is returned to society.