The Race To The Bottom by Alan Tonelson 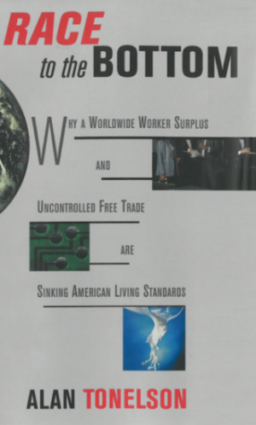 The Race To The Bottom: Why A Worldwide Worker Surplus And Uncontrolled Free Trade Are Sinking American Living Standards

As evidenced by the WTO riots in Seattle in December 1999, there is a volatile debate among Americans over how the new world economy affects our standards of living and our country’s chances for future prosperity. With giant multinational companies based in the U.S. and other wealthy countries transferring ever more factories and labs to poorer countries, the fear is that slave-wage workers overseas are undermining the bargaining power of labor in the industrialized world.In this book Alan Tonelson explains how a competition has emerged in which countries with the weakest workplace safety laws, the lowest taxes, and the toughest unionization laws win investment from American and European countries. Tonelson argues that this “race to the bottom” of labor standards has been the driving force behind the decline of American living standards for the past quarter century, and, as we have already begun to see, will cause even bigger problems for the worldwide economy as it continues.Tonelson analyzes how the entry of such population giants as China, India, and Brazil into the global market have added fuel to the eroding labor standards. He reveals how an ever larger share of the foreign competition faced by American laborers is hitting not just fields such as apparel and toys, but many of America’s highest wage industries such as aerospace and software. And he describes how the reeducation and retraining programs that political leaders say is the remedy to the problem will do nothing to help most Americans cope with competition from the global workforce.A lively, provocative guide to the new global economy, The Race to the Bottom fills the gap of hard evidence in readable form in the globalization debate, providing the guidebook that American workers have been waiting for, and the indictment that our economic and policy establishments have been dreading.

Described in The New Republic as “probably the most significant economist spreading the nationalist gospel,” Alan Tonelson has been active in national trade politics for a decade. A Research Fellow at the United States Business and Industry Council, he lives in Washington, D.C.

Back to From our Boardmembers