Should Countries Profit Each Time You Buy and iPhone? This Economist Says Yes 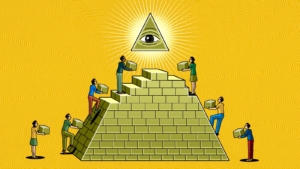 Mariana Mazzucato’s work sheds much needed light on how taxpayer-funded research drives innovation in modern economies. In her latest book, The Value of Everything – Making and Taking in the Global Economy (2018), a title that reminds us of Oscar Wilde’s famous characterization of the cynic as the “man who knows the price of everything and the value of nothing”, she debunks the theory that private entrepreneurs are the sole risk-takers and creators of value in society and therefore the only ones entitled to reap the rewards of innovation.

According to Mazzucato, this theory has offered the rational justification for value-based pricing, a technique for setting the price of a product or service based on the economic value it offers to customers. This strategy allows companies to capture the maximum amount that a customer is willing to pay in order to significantly improve company profits.

Mazzucato’ s argument is not intended to berate the role of entrepreneurs, nor does it seek to exaggerate state intervention in the economic sphere. However, she stresses the need for a theory of value that acknowledges the role of government in funding innovation, not just that of the private sector and its celebrated entrepreneurs.

A great example of government’s overlooked innovation role for this is the story of Elon Musk, the Silicon Valley tycoon whose companies, Tesla and SpaceX were built on the work of NASA and the Department of Energy. Another example is Amazon, the trillion-dollar retail giant whose online business model is entirely based on the Internet, a Defense Department-funded project. Even SIRI, the voice-controlled personal assistant embedded in Apple’s devices, has its origin in a Pentagon project. In fact, according to Mazzucato, the components that make the iPhone so smart have been funded by the taxpayer (Mazzucato, 2015), and yet, all the profits flow into Apple’s coffers. The “Entrepreneurial State”, whose vision and funding was instrumental in bringing about these technological and commercial successes, does not get its fair share of the reward; either in the form of equity to fund future innovation, in lower prices for the taxpaying consumer, or even in higher wages for workers. In other words, the risks are socialized, but the profits are privatized.

This is clearly a practice that Henry George would have called rent-seeking: the appropriation of collectively created values by private entrepreneurs. Studies have shown that this phenomenon plays a role in income inequality (Lazonick, 2013). However, it also leads to a misallocation of resources, as firms rely increasingly on taxpayer-funded research while using their excess profits (rent) for speculative activities such as share buybacks.