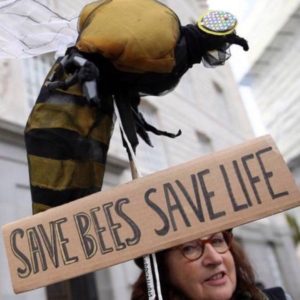 University of Cambridge’s Diane Coyle (author of Markets, State, and People: Economics for Public Policy) offers a very insightful and useful critique of mainstream economics as it has been taught for the last 120 years, correctly diagnosing its failure to identify land as a separate factor of production, with that of labor and capital. Yes, the contribution of bees to the value of commercial crops ought to be factored into a truthful economic analysis, one that removes GDP as its primary metric. Yet, she sides with her Cambridge colleague Partha Dasgupta that economics “should regard natural assets (i.e., land) as productive capital,” clearly contradicting herself, without perhaps even realizing it. The point Coyle and Dasgupta are missing is that natural assets must be TAKEN OUT of the market and assigned NO PRICE, so that bees’ contributions, and the quality of the air we breathe and the water we drink cannot be speculated upon. These commons goods cannot ethically be analyzed within neoclassical economic practice; they SHOULD be protected as sacred, outside of a market. If we were to do the same with physical land, we would set up a system where land cannot be bought or sold (i.e., it has no price) but rather only transferred to a party taking on the obligation to pay a rent (effectively a land value tax) to the authority that makes such land so valuable in its provision of services such as police protection, education, transit, healthcare, power, communications, water supply, sewerage services, recreation, and food safety. The most wonderful thing about such a world is that you don’t need a bank to transfer land titles, and nobody can be evicted for non-payment of a land mortgage; and nobody would speculate in vacant lots with such high obligations. The next economic downturn COULD be about some type of speculation, but not land speculation, as many past recessions have been.