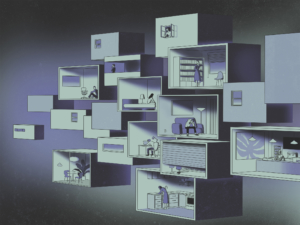 With over 36 million filing for unemployment in less than 3 months, the public health crisis  ushered in by the coronavirus could become a housing crisis as many Americans are unable to pay their monthly rents. By May 5, nearly 80% of renters made their payment; that’s about a 2% increase compared to April. However, the situation could explode in coming months if the economy does not recover fast enough and rental and mortgage payments come due. There is already a movement sprouting all over the country that is calling for a rent strike.

In the meantime, the federal government adopted a battery of emergency measures designed to mitigate the impact of the shock on both renters and property owners. These include mortgage relief to landlords under the condition that they suspend evictions. However, property owners with a private mortgage aren’t eligible for this first round of relief measures and, while many of them are corporate landlords, the overwhelming majority consists of mom-and-pops who supply the vast majority of affordable housing units in the country. The fear that cascading defaults of these smaller landlords could eventually result in Wall Street backed corporate landlords capturing a larger portion of the housing market after the crisis is now fueling calls for a government bailout.

One simple way out of the conundrum is to have the federal government step in and bailout the impacted landlords. That would prevent mass foreclosures, save the smaller landlords and head off a potential financial crisis. But by doing so, the government would pass on a golden opportunity to reform the housing sector in a way that would make it more resilient to future crises, in addition to having a lasting positive impact on the entire economy.

Many studies have indeed shown that real estate accounts for a sizeable portion of bank lending in the US and other major economies like the UK (Turner, 2015). Not only does this cause less money to flow to other productive parts of the economy, it pushes up land values which in turn drives inequality as Matthew Rognlie demonstrated in his critique of Thomas Piketty’s Capital in the 21st Century (2014).

Moreover, a 2018 study by a group of researchers of the National Bureau of Economic Research and referenced by Noah Smith in a recent Bloomberg piece suggests that in terms of return, housing compares and sometimes surpasses equity. It is also less volatile and therefore less risky; a one way bet so to speak.

Of course, what’s driving these huge returns is not so much the structures or buildings which depreciate over time, but the locational land values that are created and maintained by society as a whole primarily through publicly funded infrastructure. This massive rental windfall is at the heart of the commodification and excessive financialization of housing; an important driver of the affordability crisis.

Bailing out the landlords could in the short term prevent the crisis from wreaking havoc in the entire housing supply chain, however, it would also rescue and therefore preserve a system that forces the average American to spend 37% of his income in rent. A far more effective and immediately applicable solution would consist in having the government extend interest free loans to tenants with the condition that they setup Limited Equity Cooperatives (LEC) and purchase the properties that are facing foreclosure. Landlords would be saved from financial destitution and the financial institutions holding the mortgages would not be in jeopardy.

Moreover, the LEC would be required to insert a clause in its charter that would prevent tenants from reselling their units at market rate. With the rent-seeking motive removed, affordability can be assured.

In the long term however, a complete reform of the property tax to shift the fiscal burden away from buildings onto land would provide the ultimate fix to our housing problem. Combined with the relaxation of zoning rules, a land value tax would end land speculation and make more land available for development as well as encourage more building activity to address the supply shortage problem.