Leaning on the Land 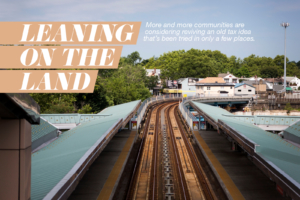 In Leaning on the Land, J. Brian Charles describes the financial tragedy that Millbourne, Pennsylvania went through. A Sears store served as the main source of tax revenue for the borough, but it closed down in 1989, leaving Millbourne hungry for revenue. “Tax bills skyrocketed between 1993 and 2014. But city leaders ultimately realized the long-term vitality of Millbourne could not be financed by single-family homeowners” (Charles, 2019). The borough turned to Henry George’s “land value tax”. As a result, the tax bills of homeowners dropped by a third, while the tax bill of the Sears property doubled. It also incentivized owners of large properties to introduce more productive uses on these plots of land. Such a result was possible due to the elimination of taxes on the structures and a sharp increase of the tax rate on land.

Although not every municipality may have had the same experience as Millbourne, the borough’s implementation of a “land value tax” is an example that should not be overlooked. By shifting the tax burden to landowners, many homeowners having to pay less in taxes, could spend the money that they have saved to help grow Millbourne’s economy.

*Kuba Dziedzicki is a graduate student at St. John’s University. He is currently working as an intern at the Henry George School of Social Science.