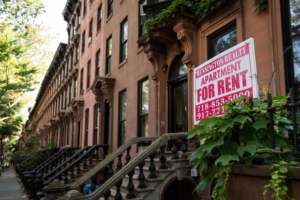 It has been a little over two months since New York state adopted a sweeping set of new laws that will make it harder for landlords to raise rents on stabilized units or move them out of regulation.

For the renters and tenant community, the new rent control law was good news. But the real estate establishment called it unfair, ineffective, and unconstitutional.

There’s no question that New York faces a severe housing affordability crisis, but it is questionable whether draconian rent control measures is the way to fix it. Such measures may at best provide temporary relief, but in the long run they could tighten up housing markets and cause rents to go up even higher.

The root cause of the housing problem in New York (and this is true for other US metro areas) is an imbalance between a growing demand for housing and a declining housing stock (Been et al. 2017). High rental prices often reflect the need for more housing units to accommodate a growing population, but instead of encouraging more construction, our demand-side centered housing policies had focused on providing easy access to mortgages. Overly restrictive zoning laws, NYMBISM and in certain cities such as San Diego, legal and administrative obstacles to building multi-family versus single-family units have also contributed to the problem.

If our housing crisis is essentially a supply issue, then excessive reliance on rent control could be counterproductive. Price controls always tend to cause shortages. A study of rent control in San Francisco found that while it gave protection to long-time tenants, it resulted in reduced rental housing supply because property owners found it more profitable to convert apartments into condominiums (Diamond et al., 2017).

Any long-term solution to the affordability crisis would require policies aimed at increasing the housing stock. A Georgist inspired reform known as split-rate taxation could make a great difference in this regard. Under such a system, property assessments are divided into two parts: the value of the land and the value of the buildings (or “improvements”) on the land. While most jurisdictions apply the same tax rate to each entity, under split-rate taxation, land is taxed at a significantly higher rate than improvements. The lower rate for improvements removes the disincentive to develop and maintain a property while the higher rate on land discourages speculation. In Harrisburg, and twenty other Pennsylvania cities (Banzhaf et al., 2008), this approach has incentivized denser development and discouraged landowners from sitting on undeveloped properties, resulting in more housing units and lower rental costs.