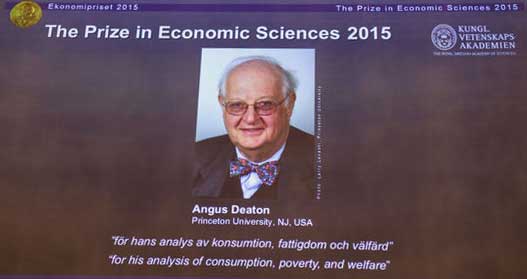 ANGUS DEATON has been named the winner of this year’s Sveriges Riksbank prize in economic sciences in memory of Alfred Nobel. Mr Deaton is a Britain-born economist (Scotland, to be specific), who earned his PhD in economics at Cambridge University before moving to America; he is now at Princeton University. Mr Deaton is best known for his work on consumption theory, welfare and inequality.

The committee awarded him the honour “for his analysis of consumption, poverty, and welfare”. His work “linking detailed individual choices and aggregate outcomes” was praised for having helped to “transform the fields of microeconomics, macroeconomics, and development economics”. According to the Royal Swedish Academy of Sciences’s website, his work has helped to provide answers for three big questions in economics:

“How do consumers distribute their spending among different goods? Answering this question is not only necessary for explaining and forecasting actual consumption patterns, but also crucial in evaluating how policy reforms, like changes in consumption taxes, affect the welfare of different groups. In his early work around 1980, Deaton developed the Almost Ideal Demand System—a flexible, yet simple, way of estimating how the demand for each good depends on the prices of all goods and on individual incomes. His approach and its later modifications are now standard tools, both in academia and in practical policy evaluation…