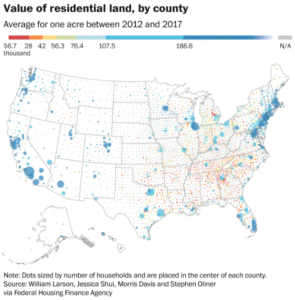 Why is it that an acre of residential land in Brooklyn Heights, New York costs 7500 times higher than an equivalent plot in Yell County, Arkansas?

That’s the question that Andrew Van Dam sets out to answer in a recent piece that appeared in the Washington Post. The short answer, as one may guess is; location, location, location. New York is a highly urbanized metropolis with a continuously expanding population and blessed with a world class infrastructure. Land in New York is therefore more desirable and hence more in demand than in a rural county in Arkansas.

It’s a well-known fact that amenities, subway lines and other publicly funded infrastructure contribute to the desirability of a location both for businesses and people. There is however another important factor at play that holds the key to understanding why land prices in cities like New York tend to appreciate faster than other assets. Land is needed for all production, and because of its limited supply (they ain’t making it anymore), rising demand almost invariably translates into higher prices. Economists calls this the “inelasticity factor” and it is at the heart of the growing wealth polarization in America and in many free market Western economies (Rognlie, 2015).

Studies have shown that most of the appreciation in house prices is in fact nothing more than an appreciation of land prices; for structures such as buildings tend to depreciate over time. According to Michael Hudson, the value of land accounts for nearly 70% of house prices in New York (Hudson, 2011). This makes land the investment vehicle of choice, resulting in a diversion of resources away from productive investment, and lost employment opportunities.

Henry George identified the problem in his best-selling book, Progress and Poverty (1879). His solution, a single tax on the unimproved value of land would ensure the collection for the benefit of the community of wealth that belongs to the community.
George and his followers argued that the “tax to end all taxes” is commanded by justice and governed by reason, for it would promote wealth creation and eliminate wealth appropriation caused by land speculation; a phenomenon that some economists have blamed for the soaring wealth inequality and a major reason behind the boom-bust cycle (Hoyt, 1933).

George’s proposed reform would be the ultimate tax cut for the productive sector; a fiscal stimulus built around the very notion of justice. It would incentivize wealth creation and discourage the sort of parasitic rent-seeking that cannibalizes the real economy and causes poverty and inequality.