By Emmanuel Saez and Gabriel Zucman 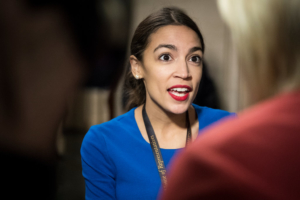 AOC is radical and that is OK. However, she is not radical enough; not as radical as Henry George was. In Saez and Zucman’s article on AOC, they make a good case for higher marginal tax rates to address inequality of wealth distribution. But to do that is like using a meat cleaver to chop a cocktail wiener. There is a huge difference between wealth created from rent seeking (speculation) and honest capitalist profit. There is plenty of wealth to be had squeezing ground rent out of the economy in a bustling metropolis without any need to tax incomes. So should the marginal tax rate be 90% or 0% for incomes? I say 0% but collect 100% of ground rent. Reward productivity, give everybody an immediate 30% boost in wages, and pay for needed infrastructure.